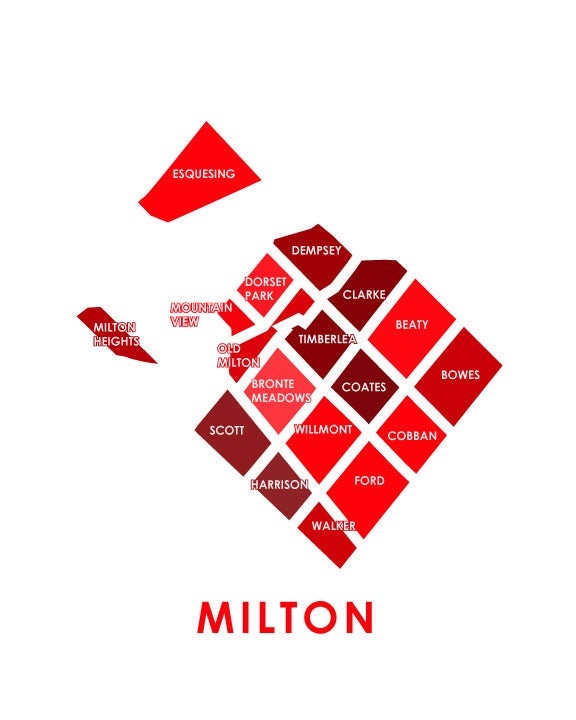 Beaty is known for it's community feel, schools, parks and bike paths.  You will find townhomes, semi-detached and single family homes throughout this neighbourhood in south east Milton.

Bronte Meadows is a mature area built in the early 1980's, consisting of mature lots and tree-lined streets.  You will find yourself within walking distance of downtown Milton, Milton Sports Centre and the many events at the fairgrounds.

Clarke was the first of the new developments in 2000 and is a great location for commuters.  The abundance of parks makes this an area of choice for families.

Coates first began development in 2005 in the south end of town.  With many parks, bike lanes and splash pads.  This is a great community for families.

Dorset Park is a mature area developed in the late 1970's and early 1980's. A peaceful community with large lots and trees, and quick access to GO Transit and commuter highways.

Harrison is Milton's newest community and sits on the edge of the Niagara Escarpment.  This south west community is home to the Milton Velodrome, the possible future Laurier University Campus and with the planned road expansions will have easy access to highway 401.

Old Milton is the downtown area consisting of unique century and war time homes.  A short walk will take you to the shops and restaurants on Main Street, or the Farmer's Market each Saturday morning from May to October.

Scott offers the best of both worlds - the closest neighbourhood to the Niagara Escarpment while close to downtown shops and easy access to amenities.  A ten minute drive to Kelso Beach in the summer and Glen Eden Ski Terrain in the winter.

Timberlea is a desirable area developed during the late 1970's and early 1980's, located in the centre of Milton close to shopping and GO Transit.  This area has unique homes including condo townhomes, bungalows and Drury Park Adult Community.

Willmott is a newer area in which development began in 2009.  This area has a variety of home choices along with the Milton Sports Centre, Tennis Club and the Milton District Hospital.
Save this search and subscribe to email alerts: Automatically be notified of new listings that match this search!
Showing 1 to 15 of 187 results